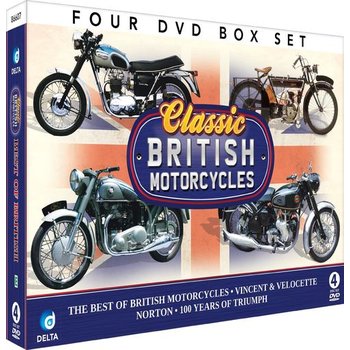 Motorcycles Soon after the birth of Bayliss and Thomas's 1896 Excelsior, the first British motorcycle, dozens of small manufacturers followed their pioneering lead, giving birth to the British motorcycle industry. This programme brings you rare footage of many of the very early models produced before world war one, between the wars and after world war two, with many of the earliest bikes featured being the very last examples of their type.

Norton James 'Pa' Norton founded his company in 1898 making bicycle parts, producing his first motorcycle in 1902 that looked like an ordinary pedal cycle with a Clement engine and petrol tank bolted on. Later, before developing power units to his own design, Norton used Peugeot engines, too.

Throughout its history, Norton had a very competitive racing team, taking many trophies and breaking innumerable records, especially throughout the thirties and fifties. Sadly, the highwater mark of the company's success came after 'Pa' died in 1925 at the tragically young age of 52. Taken over by AMC in 1953, the company continued to build impressive machines and to attract big names to ride them, but never again did Norton reach the pinnacle it occupied in the thirties and fifties.

In this programme, we focus on the period up to the fifties, when Geoff Duke took both the 350cc and 500cc World Championships and the company was taken over by AMC.

Vincent HRD - Originally founded by Howard R Davies in 1924, HRD suffered poor sales that forced the company in to voluntary liquidation in 1927. Subsequently purchased by Philip Vincent in the same year, with the help of his father, Vincent became one of the most respected marques in British motorcycling history.

Velocette - A family run company that survived a shaky start, Velocette developed a solid reputation focused on its large-capacity four-stroke singles, mostly in traditional black and gold livery. Often ahead of its time, the company s tendency to overspend on development eventually brought its undoing, but not before building some of the finest bikes of the post-war era.

100 Years Of Triumph Celebrating the 2002 centenary of Triumph motorcycles, this fascinating programme is stuffed with a host of evocative pre-war models, names that evoke a picture of power combined with a special Triumph individuality ingrained in every machine they built.

Despite a long wartime gap in production and crippling manpower shortage, Triumph managed to produce some 50,000 machines for the military and, after the war, more great names graced fabulous new machines Trophy, Thunderbird and most evocative of all, 1959's Bonneville. During the 60s the Japanese influence started to take hold and Triumph sales went in to decline before the company finally ceased production in 1983.

Part two of the Triumph story begins with John Bloor's purchase of Triumph's Meriden site along with all naming rights. After much speculation, Triumph bikes began to emerge from a new works in Hinckley and 1992 saw the end of the first full year of production with 5000 bikes built, this figure rising to 30,000 machines 10 years later. Quite an incredible turnaround.