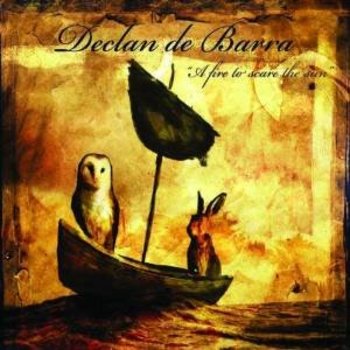 DECLAN DE BARRA - A FIRE TO SCARE THE SUN (CD)

“A Fire to scare the sun “ is the second album by the Irish singer Declan de Barra.
The diversity of his previous album “Song of a thousand birds” has been distilled into an even purer drop on this album.

And it is de Barra’s voice that gives these songs an otherworldly quality and sets him apart from the pack. A beautiful dark intensity, sweetness and power with a connection hardwired to the soul. A unique voice for the hardest of times.

This more focused sound could described as new breed of “indie folk noir”.

Recorded and produced by de Barra in his own studio in an abandoned flat in Dublin, the songs were written over a year in various locations, France, Germany, India and Ireland.

It features drums by James Dunne from the RTE symphony orchestra, Brian Hogan from Kíla on lapsteel and gretsch guitar, Cello by long time touring partner Mary Barnecutt and violin and viola by classical virtuoso Cora Venus Lunny.
Having heard Cora sing while playing together at a show in Copenhagen, Declan convinced Cora to sing on the album resulting in the haunting exit track “Red Forests”.

De Barra is coy when it comes to describing the meanings of the songs.
“I never really explain the lyrics, it’s disrespectful to the songs and the listeners. As the song plays, a different image or little movie will play itself out inside listener’s head. And so the song belongs to them, where they first heard it, and what it means to them in their head and heart. In that way the song has a million different lives.“

The album art, also created by de Barra, features hares, crows, deer and owls set in urban landscapes. Animals often appearing in Irish mythology. The art like the music seem to straddle worlds, the past and the present, the urban and the wild.

A state of flux exists with “A fire to scare the sun”, the music could sit happily in a pub in the west of Ireland, an indie club in New York, a cafe in Lebanon or a punk squat in Berlin. It flows through many musical realms and yet belongs to none.

1.  Until The Morning Comes

DECLAN DE BARRA - A FIRE TO SCARE THE SUN (CD)