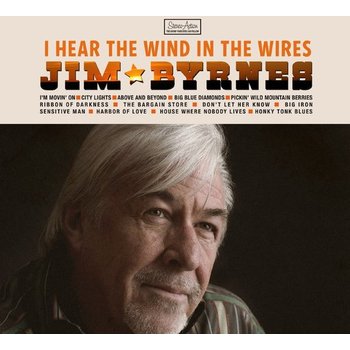 JIM BYRNES - I HEAR THE WIND IN THE WIRES (CD)

Jim Byrnes I Hear The Wind In The Wires CD

12. House Where Nobody Lives

Not just any musician can feel music like this and bring it to life, so when Jim and Steve hunkered down with their vintage equipment and gear for a four day recording session at Bryan Adams' Warehouse Studios in Vancouver, they brought the cream of the city's players in with them. With musicians like Geoff Hicks (drums), Chris Gestrin (organ, tack piano, wirlitzer), Mike Sanyshyn (fiddle), John Resichman (mandolin), and Rob Becker (bass) on board, there's not a single note wasted as the ensemble sings and plays with an economy and intuition that is missing from most modern blues and country records that favor over-playing and glossy production more than talent and authentic emotion. Whether Jim's delivering a swinging, soulful take of Hank Williams' 'Honky Tonk Blues' in his best loping, old rake of a cowboy voice over a funky organ and pedal steel duet, or he's getting down with a heartfelt interpretation of Gordon Lightfoot's 'Ribbon of Darkness' that gives new meaning to the expression 'world-weary', Byrnes and Dawson are firing on all cylinders from the first to the last note of "I Hear The Wind In The Wires". As Byrnes remembers, 'Man, this was such a great experience. Every night Steve and I were in the studio, we'd think of other songs we could do. This album just scratches the surface. This could easily be a six CD box set and we'd still have songs to burn!" Take just one listen to Byrnes and Colleen Rennison of 'No Sinner' rave their way through 'Wild Mountain Berries' - the old Kenny Vernon and Lawanda Lindsey duet - before you hear him light into Little Willie John's 'Big Blue Diamonds' or nail a truly transcendent take of Nick Lowe's 'Sentimental Man' and you'll be crossing your fingers and hoping that this is just the first of many such records and that that box set Jim is talking about is just around the corner. Until then, you'll just have to let the songs on "I Hear The Wind In The Wires" knock the frown off your face, pick you up and dust you off before sending you out - six guns smoking – to go looking for love in all the wrong places.

JIM BYRNES - I HEAR THE WIND IN THE WIRES (CD)